May 1st was going to be my night!  I set out after a certain kind of fish.  Andrew finally landed his hammer after 4 years of trying and I really wanted to catch one myself.  Knowing what they are eating and where they are located we set out with big things in mind.   I anxiously awaited sunset.  This is when we’ve been getting the most bites.  Just as the sun vanished into the horizon my 80w went screaming towards cayo costa and had no signs of stopping!

I quickly strapped myself in to only watch my line vanish before my eyes.  I gave more and more drag.  Still this fish was not stopping.  I yelled down the beach to some fellow anglers for some help to reel up our other rod in-case we had to make a run down the beach.  Now im getting concerned as I only see about 200-300 yard left on the spool and can hardly stand up.  I had my trauma sheers in my hand in case I needed to cut the line.  Austin Wholean and friends came to my relief and we put a STOP to this fish with 100 yards or less on the spool.  Now we had to use some serious muscle to gain back the line. 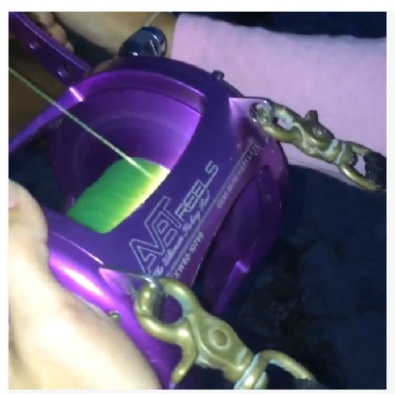 In the previous weeks we’ve lost a fish to the many tarpon boats across boca grande pass.   We knew we had to keep this fish from running out of the pass.   I soon knew that I couldn’t do this alone, as I almost fell face first into the sand.  The power behind this fish on locked drag was something I’ve never felt and I have been spooled twice previously.   All 5+ guys worked on hand- lining so it was easier for me to gain line back.  It WORKED!  I was able to gain back about 600 of my 750 yards before disaster struck.   Just as I was getting excited about possibly landing this monster she ran again and this time right towards the tarpon boats.   I made the decision to stop her.  All hands on deck.  I held the spool and the guys dug their feet in the sand and held on the best the could. Unfortunately the line snapped near shore and I never saw her.   The breaking strength of 100lb suffex mono is holding the spool, while five guys play tug of war.  WAY over 100 lbs.   I’m a firm believer that if its meant to be your fish it will be.  I am grateful to be privileged enough to feel this ocean beast’s power.  We play tug of war with these elder’s of the sea and especially the ones we loose keep us coming back for more! 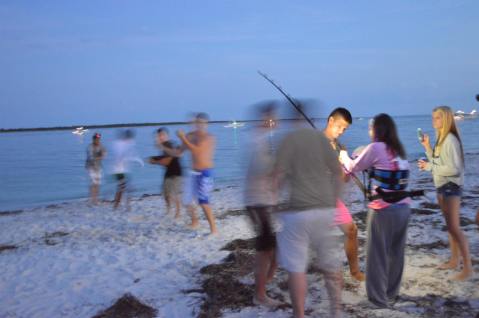 Pictured above is the line of helpers!  Andrew at the front & Austin and I at the reel!